The township of Mataranka is three kilometres from Bitter Springs Cabins & Camping. It's a small town steeped in the history of the Northern Territory, resting quietly alongside the Stuart Highway with a population of around 250 people. 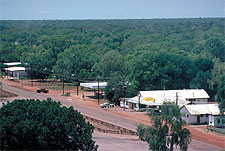 All main services are available in Mataranka - fuel, mechanical workshop, supermarket, general store, hotel and accommodation. There is a Post Office and Centrelink Agency along with a Visitor Information Service and Public Internet Booth at the local Council Office. General tourism enquiries can be directed to the Council on 08 89754576 or [email protected]

The main employment industries in Mataranka are Government (Police, Health, School, National Parks), Tourism and the Lime Mill (10 km south of the town). Horticulture is a new industry with a large melon farm and a huge mango plantation established nearby on the Roper Highway.

The original inhabitants of this area were the Mangarayi and Yangman Aboriginal people. Many of their descendants still live in the region. According to Aboriginal legend it was a Wild Wind that arose in the Dreamtime and swept across this land creating land formations such as the Roper River, Bitter Springs and Rainbow Springs.

Elsey Station was the first European settlement in the area. It was made famous in Mrs Aeneas Gunn’s book, ‘We of the Never Never’ and Mataranka has since become known as the capital of the Never Never. The original Elsey Cemetery (right) can still be seen 20k south of the town.

Mataranka came into being in the early part of the 20th Century. In 1911 the Commonwealth took over responsibility for what was the “Northern Territory of South Australia” and the first Commonwealth Administrator, John Gilruth, was much taken by the country around Bitter Springs. By 1920 he established research farms around the present site of Mataranka in a failed attempt to introduce sheep. Gilruth proposed Mataranka (he coined the town name after a stint in New Zealand) as the ‘Inland Capital of the Northern Territory’ because he considered Darwin’s marine climate to be ‘not suitable for ladies and children’. Visionary though Gilruth may have been, Mataranka as a seat of administration never came to fruition.

In 1927 the North Australian Railway reached Mataranka and the small town’s ongoing existence as a service centre for the surrounding pastoral industry was ensured.

A walk through the town’s parklands shows some of the history of the region in locally produced statues. The Stockyard Gallery has local Aboriginal and other NT produced artworks on display and for sale. There is a museum of the area's Aboriginal, pastoral, railway and World War 2 history at the Council Offices. 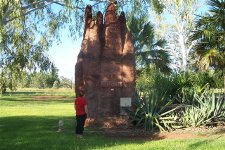 A giant Termite Mound in the centre of town provides some interesting facts on these fascinating features of our natural landscape.

Barramundi fish can be seen being fed twice a day in a dam beside the Territory Manor restaurant. Admission is free.

The Mataranka Thermal Springs are a short drive out of town and a replica of the old Elsey homestead can be seen here. Bitter Springs, situated at the end of Martin Road, is the closest Thermal Pool to the township.

Elsey National Park provides access to many beautiful places along the Roper River. There is an information display at the Park Head Office on the Stuart Highway on the southern edge of the township. (phone: 08 89754560).

Be sure to pick up a copy of the local map and guide to Mataranka's Tourist Attractions from the Visitor Information Centre.

For directions or map to Bitter Springs Cabins & Camping, see our Contact Us page.